March 17, 2010
last weekend was a super hectic weekend for me. initially i thought that i would get bored since my girfriend suddenly decided to join her officemate and her friends on their trip to Cagayan de Oro/ Camiguin.

so, while she and her new friends were doing this. 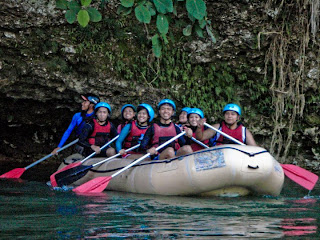 i had my own lakad with my takbo peeps :)

i don't really know how to play bowling for real. my first experience of playing bowling was with Wii, but since i'm sure it's going to be different, i had to ask the masters on the difference of playing virtual bowling vs. real bowling. 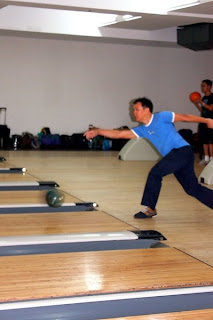 this pose is the finish product na.

first step he taught was to know yung parang "bwelo" phase that we usually see from the bowlers on tv. he mentioned that parang 4 steps yun before the ball is released. so step one technically is to step your right foot forward (or left if kaliwete) and at the same time you put the ball in front of you sabay ng step forward. second step was to swing the ball back sabay with your left foot stepping forward naman. tas third step is to swing the ball back again (ata?) the fourth and final step is to do the pose above (release the ball forward,make it slide, hopefully hindi sha ma kanal para di naman kahiya). 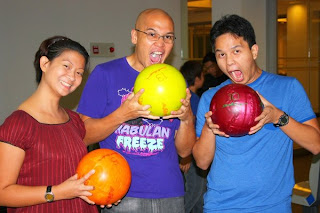 doc eye, bry, and myself. jawbreakers, anyone? :D 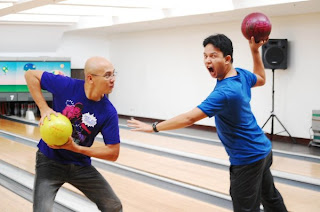 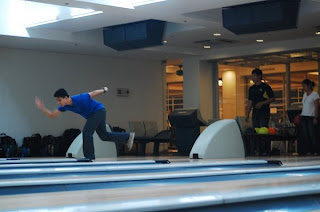 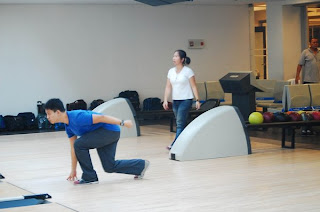 the runner in me wanted to chase after the ball just to make sure iwas-kanal yung shot. 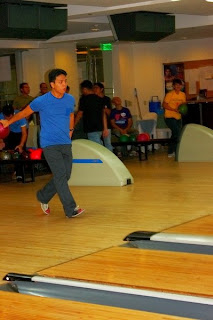 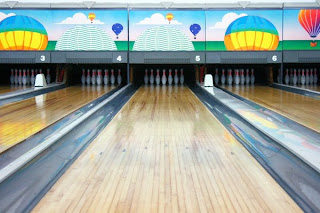 the night actually was for the groupings for the upcoming Silverprex Cup, initiated by Chelly, Earl, Julie, and shempre si Lorie aka Silverprex.

hindi naman ako sobrang olats with my first attempt at playing bowling. in fairness, i was able to get a feel of everything one would expect in a bowling game: canal (twice pa!) , spare, and would you believe naka strike din ako! 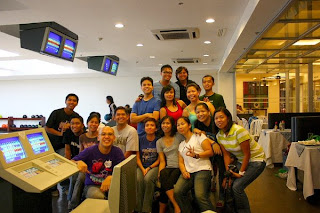 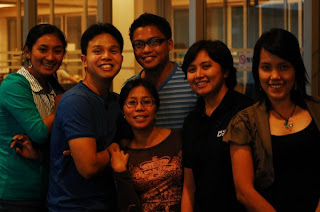 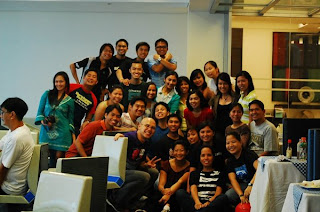 after the preliminary game for the groupings, others went to Music 21 pa to sing, while I went home naman na to rest because i initially intended to join EVENT 2: the group run with the Secondwind gang.

unfortunately i got too tired from the bowling, so i wasn't able to join the group run.

in the afternoon naman, was EVENT #3: the Nestea Fit Camp Hot to play Ultimate Frisbee.

at first i was a bit hesitant as it was too hot that day, tas my scheduled session was to start pa ata at 3PM so diba, sobrang init. enjoy naman sha, i was able to learn the basics of frisbee, backhand, forehand throws, tapos pati yung different types of how to catch the disc. kulang na lang was to play the actual game.

here are some pics from that HOT day but COOL game :) 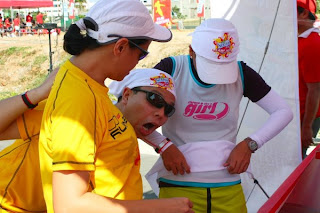 late day campers!
for a minimal fee of P50, i was able to get the bandana, a pseudo-road id, and the Nestea Fit bottle where we had a tumbler-full of free taste of their newest flavor. 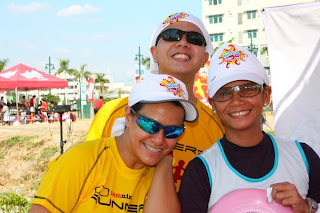 the late comers.
i went to the frisbee class with roselle and carmen. they both were there na the week prior, so i was the only one na totally newbie with the group. other takbo.ph peeps who went that day were Z and Marvs, Dhenz and TiN, Carina. Luis & Abby went there also nung morning, but didn't join the festivities. 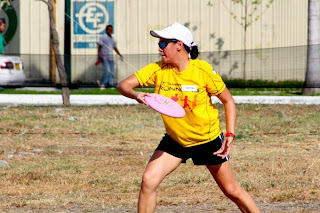 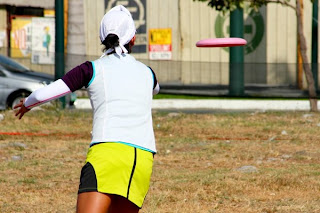 trivia: did you know that the Running Diva, Roselle, is a member of the Philippine Women's Ultimate group? she also taught us some of the basics while waiting for the other 3PM session peeps. Oha! :)
also, later in the day, we found out that RD is also a Timezone Queen, winning all the games that we went to after dinner. hahaha ;)
hindi lang sha running diva, but also, singing, dancing, timezoning, frisbeeing diva! 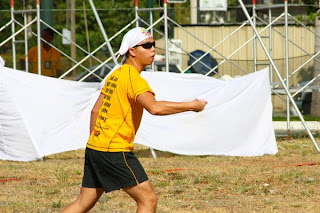 halata ba sa nyort nyorts na runner?
another trivia: did you know that i also played badminton?
kaya the wrist flick motion was not an alien term when the instructors
were explaining how to do the backhand & forehand throws :) 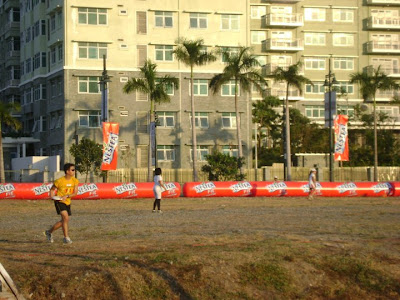 serious na ito.
at around 530, we called it the day na and freshened up before having dinner, and eventually went home as there was still the last event for my jam-packed weekend. 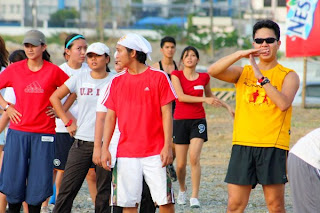 PRRRT! timeout! it's way past my bed time na!
EVENT 4: SUPPORT for the Ateneo Aquathlon
the next day, last day of my very hectic weekend, i promised my friends, well, actually marami din pala silang sumali (both takbo.ph and secondwind peeps) that i will be PHOTO TIM that day. i volunteered my services na i'd be taking their pics while they swim and run around Ateneo.
sobrang dami kong nakuhanan ng pics, at kung kani-kaninong cameras din ang nagamit ko. so since hindi ako ang nagdala ng camera, sa mga websites/multiply nila ko kinuha ang ilang pics.
here are some teaser pics. 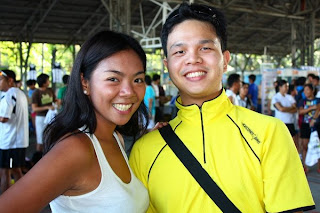 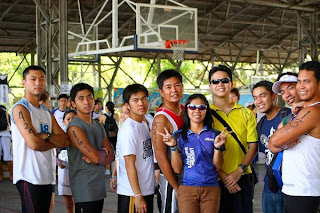 group pic after the lite category, while waiting for the classics 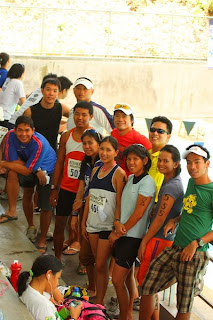 group pic again before the start of the men's classic 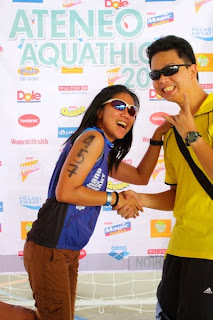 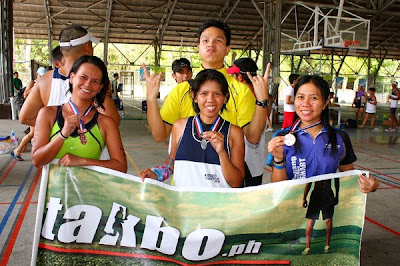 can you ENDURE the HEAT?